Every time you start working on a web development project with a new contractor you have to choose a pricing model. A pricing model a matter of great importance. The method that you go with will define the nature of the future relationship. This is intended as the first of three articles in which I’ll talk about different approaches to software development project pricing that digital agencies use.

The two most common pricing models that immediately come to mind are Fixed Price and Time & Materials. Today I’ll talk about the Fixed Price model.

In the majority of cases a Fixed Price model is selected for small to medium-sized projects with a relatively small budget. The reason is rather straightforward: clients are trying to control their expenses and want to avoid uncertainty about the final cost of the finished product. With a Fixed Price model, the client does get a figure up-front, allegedly representing the final cost. They can just plug that figure into the budget and they’re done. Or at least they get the impression that they are.

Let’s dig a bit deeper into the internal processes of the contractor, though – that is, the company that enters into the commitment to accomplish the project within a specific budget. Specifically, let’s look at the process from the point of view of the Business Analyst preparing valuation and determining web project pricing (and trust me, I know what I’m talking about – I’ve been there :-)).

Business Analysts ask clients as many questions as possible to get a clear understanding of the proposed web development project. They draw detailed wireframes and build prototypes. The depth of the initial project research depends on a level of sophistication of the Business Analyst. At some point he or she sits down with a project manager or a lead developer to estimate the effort required to implement this web development project.

Perhaps the project manager estimates the project will require 300 hours of development time. But the project manager is not an experienced Business Analyst! Experienced analysts know that people tend to underestimate. This is a well-known phenomenon known as the planning fallacy, which posits that time estimates for task completion suffer from an optimism bias. Therefore the Business Analyst multiplies the estimated number of hours by some internal, company-determined coefficient. This coefficient is usually close to 2, but in some cases estimated may be multiplied by 3 or even 4. These multipliers – correcting for estimation error – are the company’s way of protecting themselves from going into the red on projects. Of course, this final estimate – accounting for the coefficient – covers all website development costs, including company costs for employees such as the project manager, quality assurance team, designers, and so on. 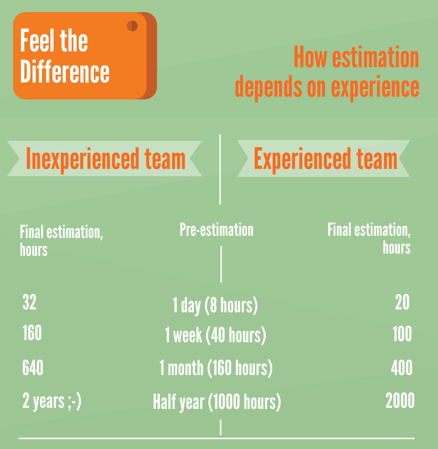 Let’s say that, in our example, the Business Analyst assumes a defensive position and sets his multiplier at 3. In this case, the project manager’s initial estimate of 300 hours becomes a final estimate of 900 hours. This is the number that is quoted to you, the client. These 900 hours are then multiplied by the average rate of the offshore software development company – for example, $50 per hour. Therefore the final cost estimate to implement the whole project comes out to $45,000.

Quite a lot for this small web project, huh?

But this is just the beginning of the fairy tale. In most cases you will be asked to sign an agreement that describes all the details of the project and states the fixed website development costs, leaving you with no flexibility down the road. The development team requires this agreement because they know that you are going to change the requirements. And they know that a change to the requirements is going to influence the web design cost quite significantly. Theoretically, the scope and cost of your project was set when the agreement was signed. But it’s not set in real life. It’s time to come out of that ideal fairy-tale world.

While implementing the project, your contractor will keep in mind the development project pricing and try to stay within the scope of the initial valuation by not letting you make changes or additions to project requirements – or by asking you for additional funds or separate agreements for any changes or additions. Do you want an Agile project management approach? Forget about it. There’s no way anyone would do that for you within a Fixed-Price model. Flexibility and Fixed-Price are antonyms.

And one more thing. Do you remember that multiplier of 3 that was supposed to guarantee that the web project would be completed within 900 hours? Let’s recall the well known Parkinson’s Law: “Work expands so as to fill the time available for its completion.” In other words, don’t expect the web development project to take less than the declared number of hours. It will take 900 hours, whether it had to or not.

To me, this looks like a win-lose game. Either you win by making the development team accomplish what you want within the agreed budget, or they win, by making you stay in the original scope of project pricing. Do you really want to play this game?

Advantages of a Fixed Price Model

Disadvantages of a Fixed Price Model

A Fixed Price approach can work reasonably well for small projects with a very limited budget, but it has many disadvantages when applied to dynamic, changing projects. In upcoming posts I will talk about other pricing models that can make your relationship with a digital agency mutually profitable.

React is a library that’s actively used and discussed by frontend developers. React solves a lot of...