Unity across Devices, Single Page Applications, Mobile-first, HTML5 and video, and several distinctive design aesthetics characterized web development in 2014. Who says March isn’t the perfect time to take a look back? Let’s jump right in and explore five of the biggest web development trends of 2014.

Responsive Web Design (RWD) is a concept that has been around since 2010. As Google’s Pete LePage explains, RWD is about having a comfortable web experience on any device. It means content that is scaled to fit your screen so that you’re not stuck squinting and zooming about a lilliputian world.

Over the past year, the focus on uniformity has shifted from being strictly about the way the web is rendered to the way our operating systems and apps increasingly blend between devices. Apple’s OS X Yosemite, released October 2014, was all about Continuity – a seamless workflow across devices – as well as integrating iOS 8 design aesthetics into the desktop world. Microsoft’s January 2015 announcement confirmed their focus in the same direction; Windows 10 will be consistent across devices in terms of design and will feature universal apps focused on the same type of seamless workflow Apple has championed.

This trend suggests three things that your customers will look for in 2015:

1) Uniform Design
Your brand and style should be instantly recognizable on any platform (web and apps, mobile and desktop, even extending into any potential print materials).

2) Effortless Transitions
Start on your phone’s browser, transition to an app, and pick up where you left off on your laptop without a hitch (maybe even cast what you’re doing onto the TV screen).

3) OS-Agnostic
The days when compatibility issues were understandable are over (remember when people cared that iOS launched without support for Flash?) Consumers expect the same experience no matter what OS, browser, or device they’re running on.

Single Page Applications (SPAs) are like desktop apps, but in your browser. Once the page is loaded you don’t need to wait for additional page loads just to jump over to a different section of the site – to see what’s in your shopping cart, for example.

The basic premise behind SPAs is not new, but modern HTML5 technologies such as WebSockets along with Javascript frameworks such as AngularJS and Ember make the implementation of SPAs a whole lot easier. Perhaps sockets sound like what you plug your toaster into and embers sound more reminiscent of campfires than computing – have no fear! You don’t need to be a geek to realize the advantages that SPAs can offer:

1) Native App Experience on the Web
Streamlined, responsive interfaces. Drag-and-drop file support. Some examples of powerful SPAs include Google Docs (which I’m currently writing in!), Spotify’s web player, and Gmail. Even Facebook is reducing new page loads and starting to look more and more like an SPA.

2) Forget Page Loading
It’s well-known that internet users are not very patient with slow-loading sites. HTML5 technologies, and specifically the rise of SPAs, mean that waiting for page loads is becoming so last year.

Search Engine Optimization (SEO) can admittedly be more difficult with SPAs than with traditional websites, but it’s not a problem that WebiNerds can’t tackle. WebiNerds understands SEO, and works with your company to make sure that your site is optimized in every way possible. SPA is not the solution for all sites, but it’s a trend that we will likely see more of in the near future. 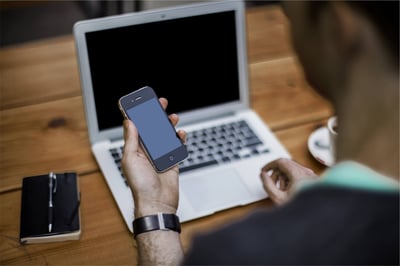 Instead of porting desktop sites to a mobile version, mobile-first suggests that development begins with mobile at the core.

LinkedIn ‘in’fluencer Daniel Burrus notes that we reached “One more interesting inflection point… late last year; the cost of making a smart phone was the same as making a dumb phone.” Satya Nadella’s Mobile First Cloud First press briefing (Microsoft’s new CEO) emphasizes the central role that mobile plays even for the former Windows desktop king. Smartphones are on the rise no matter how you dice it and no matter where in the world you are talking about.

What Mobile-first Means for You:

1) Touch-focused
With tablets now commonplace, even people viewing the desktop version of your site may not be doing so from an actual desktop or laptop (and even many laptops are adopting touch screens). The bottom line: mobile and desktop sites should be designed with touch in mind. WebiNerds builds every site from a mobile-oriented perspective, meaning your site works great on any device.

2) Image/ Graphics Quality
Many tablets today – the latest iPads and many Android and Windows devices – sport higher resolution displays than even a standard laptop or desktop monitor. Pictures and graphics should look crisp and professional on high resolution displays, where minor imperfections can become much more noticeable.

HTML5 is a fancy term for the technologies that power the modern web (if you’re interested, Joel Lee has a good post on MakeUseOf about why HTML5 matters).

Remember the days when setting up a new computer or dealing with a clean install meant downloading a bagillion plugins? Remember Flash, that resource monster that you needed to watch videos on the web? Yes, yes you do. Weren’t those the days?? Happily, plugins are on their last leg.

Comparing Flash to “cassette tapes [and] 8-tracks…”, Erika Trautman suggests (in a post for The Next Web) that 2014 was the year for Flash to kick the can. HTML5 allows browsers to handle video natively. This is great, and here’s two reasons why:

1) Video for Mobile
HTML5 video works just as great on mobile as on the desktop, and making it happen is no hassle for you. Youtube even defaults to HTML5 video these days. In short, this is great and there’s not even a thing you need to do to make it happen!

2) Video Backgrounds/ Seamless Video
Video as seamless and integrated as pictures – that’s what HTML5 lets us do. As you scroll down certain sites (such as this one for the Asus ZenWatch) you see full-page video that flows perfectly with the rest of the content. It’s aesthetically pleasing, and can add some class, character, and substance to your site.

1) Flat Design
Solid colors. Minimalist. Accessible. Flat design has taken off, though it’s not exactly new (check out the history of flat design). iOS 7 & 8, Windows 8 & 10, Android Lollipop, and OS X Yosemite have all embraced flat design and pushed it mainstream, and the web has taken up the cause as well.

2) Parallax scrolling
Endless, endless scrolling.
Parallax scrolling is all about interaction, about fitting your content on a single page and effortlessly guiding your visitors through the story you have to tell. It’s about the experience. Click through some links on Creative Bloq’s 50 great parallax scrolling websites to get a feel for it yourself.

3) Big, Bold Images
A generous picture at the top of the page was a popular design element in 2014 (take the WebiNerds homepage for example). Prominent, striking images offer a great way to catch your visitors’ attention. But more importantly, they let you effortlessly tell who you are and what you’re about. A well-chosen image with a few words can speak volumes. Be upfront with your visitors. People don’t want to dig around trying to figure out why your services are relevant to them.

Technical advances are great, but what really matters is how they work for you and your business. Simply throwing together the latest trends isn’t enough to ensure success. WebiNerds works with you to find the best solutions to all your web development needs, no matter what technologies it requires.